Campaign of the Month: February 2014

An Epic Palladium Fantasy/Rifts Game, played via Skype and Roll20.

♥Please add us to Your Favorites and stay in touch!♥
♥Feel free to leave a comment by clicking the button in the right hand column! →→→♥ 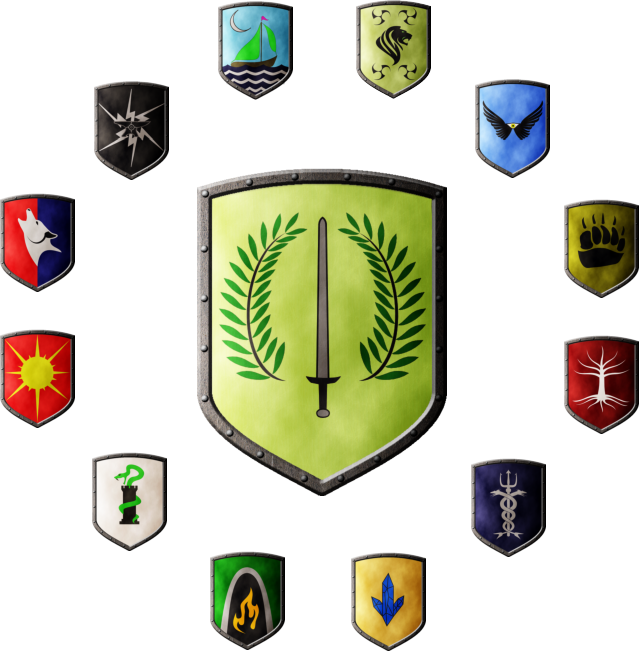 “The Heroic Realm of Regnum, a majestic realm where magic is at its height and the land is ruled by a dozen grand empires who have not warred upon each other in over 10,000 years. Yet, there brews discontent in this garden of paradise, and many of the realm fear a great destruction is soon to befall the entire realm.”

This became the project mission statement for building this world – a paragraph & one map. So I set out to build a world that had known peace longer than 250 times the duration of the United States as a nation. Also that 12 empires had no war, so academia in the form of wizards, warlocks, priests, and even some psychics were the ruling class or at the very least the power brokers of such a world. Now that is not to say there is not crime, politics, maneuvering between nations. I just looked at it as taking the cold war stance on such machinations of the powers that be. To give you an idea of scope of size the U.S.A. could fit its land mass 2 to 3 times on the main continent. So I borrowed an idea / conspiracy and created the Accord – the world government and its ruling body of the ‘World Council’ to oversee the peace.

So think of games that describe the Age of a Thousand Magicks, the great Wizards of Netheril, the first age of Elves from Gondolin! Think of the age when legends were forged on anvils and myths created by thoughts of heroes of the day. When the world comes crashing down and recovers the tales, artifacts, runic creations will be what future epochs tell the younglings about and soon dismissed as fantasy. But for now this is your age, and you are forging the lore with each breath you take.

Welcome to the world of Regnum!

Check out the Journals, which are written by the characters themselves!
Clicking Campaign Home will get you to the meat of the campaign.
The color scheme for all pages is dark red=characters, green=items, and blue=places and standard links.

We have artists commissioned to create a likeness of each of the characters. You can see the larger versions of the finished players here.

Picture acknowledgements are either listed at the bottom of the page it is used in or can be found on both the Gallery and the Acknowledgements Page.

Congrats on the Century mark!

Congratulations on winning Campaign of the Year. It seems to be quite the feather in your cap. Now you just have to win Campaign of the Decade, whenever they have it. It has been a wonderful ride with you as GM. I am glad I could bask in your light for this one.

Congratulations on Campaign of the Year for 2014!

That’s great to hear, stick around Episode One of Season Two is this Friday and logs will be coming after that!!!

I like the over all feel of the site The contrasting color font and the black and white looks really good and is evocative!

Ith Rhun!!! That is a dwarven fan’s dream!! Critical strike on 18-20 at LEVEL ONE… AND… Critical Strikes from behind. Give me a dwarf martial sai, and I will put EVERYTHING into P.S. to get the biggest damage bonus. This way, I sneak up from behind, POW!!! There is a 15% chance of doing TRIPLE damage at level one.

Awesome, I am so glad I was able to be a part of this!

So in the words of Ser Magnus, Margave Prefect of Badenfeld:

“Our doubts are traitors to our souls, and make us lose the good we oft might win by fearing to attempt. Be great in act, as you have been in thought and the day shall be yours.”

Congratulations on your winning CoTM and thanks for the interview. I really love the interviews of CotM because not only does it help us to get to know EACH OTHER better but it also helps us to understand the ideas behind the sites that we often just get a brief glimpse of really….

From your interview, I love the fact that the only reference to your part of the world is a brief mention on a couple of pages. That means you can use the wealth of the setting while still doing your own thing and not worrying too much about how it all fits in with the rest of the world. The “Gondolin” reference helped me to understand where you are going with the whole thing.

I also enjoyed reading your experience of opening that RED BOX on your birthday in 1981. I had the same feeling in 1982 although I had to buy mine myself. The influences of FRPG and fantasy novels have been as important to me as it seems to you. And thanks for mentioning that most important of OP community communication: THE COMMENTS!

As a final thing, I would like to add that I loved the link to the GALVAN NECROPOLIS video. What a great video, and once again, congratulations on your magnificent site. I’m sure all players involved are having a whale of a time.

YAY!!! I know you’d find this funny but for this month you are “King of the Nerds”

Congrats on the COTM!!

There’s a lot of blood! Halloween here we come!
Fingers, Blood Potters, and Notes in blood. Was there a shortage of ink? LOL!

Soon everyone will meet in Tristine and then…. stay tuned!

Looks awesome man. Thanks for checking out my campaign as well :)

Like the colour scheme (predominantly grey with splashes of coloured text set against the deep reddish background. Like the Picture Wiki set up and the groupings. Maps are particularly strong with good variation. I love the little coloured shields on the political map. Good luck as you move forward with your game!

I can say without Killervp giving me ongoing feedback, without the creative insights from HOTROD, without Peachyco, and HOTROD again as artists bringing the view of this world into something people could sink their teeth into. Without KnightFhurry and Justdrea81 as my brave test players, it would not be where it is today.

THANK YOU ONE AND ALL!!!

Thanks so much for bringing me in to do your maps and heraldry. I had a lot of fun and learned a lot in the process. You’ve created a rich and interesting world, and I look forward to seeing what you and your players do with it.

Thanks MGH, it’s finally looking like a game could be run from here. Woah nelly I keep writing so much, I have heard a rumor about a disease spreading called sleep. Don’t believe the lie, sleep is bad m’kay :-P

I love the content here! Site is looking amazing!

Just read over all of the new changes, and this is really starting to look like a campaign setting all it own.What a great mind you have sir!

Yay second log is up and massive changes, updates to the site.

The first log is up and commented on, woot!

Two players have embarked on a quest, got my nerves out of the way doing GM’ing again. Can’t wait to see their logs.

Welcome to Night Flurry! We had a chat session today about his character concept and it’s very intriguing.

That means a lot thank you :-)

I'm sorry, but we no longer support this web browser. Please upgrade your browser or install Chrome or Firefox to enjoy the full functionality of this site.